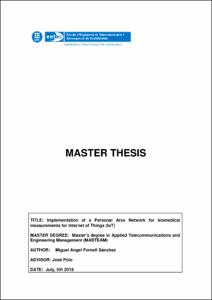 Document typeMaster thesis
Rights accessOpen Access
All rights reserved. This work is protected by the corresponding intellectual and industrial property rights. Without prejudice to any existing legal exemptions, reproduction, distribution, public communication or transformation of this work are prohibited without permission of the copyright holder
Abstract
The IoT paradigm is currently seeking to penetrate more and more into society and it seems that it will inevitably do so, with ambitious projects in both Smart Cities (Sentilo, CityOS) and private industry (Zolertia, SECE). As in each new paradigm, the abundance of protocols, solutions, and implementations end up converging in standardized and robust solutions. This is the case of the Contiki operating system developed by Adan Dunkels or Riot developed by the union of several research fronts. Also, protocols adapted for embedded wireless networks such as uIP, Rime or the established standards 6LowPAN, IEEE 802.15.4. The convergences aim to satisfy problems that the Internet in its state of the art no longer contemplates, the Internet assumes characteristics that a restricted network sees as challenges to overcome. Among these challenges, we can highlight security, limited energy, fragmentation of packages, discovering neighbours efficiently and the absence of multicast that, technically possible, would be a waste of energy. For this work, a scenario has been put into practice that although at the moment the capacities of the nodes do not satisfy the demands of a commercial implementation, the technological improvements and the low cost of the elements that are used, will make it possible that absolutely everything what can be measured of the human body is recorded and analysed by algorithms within the Big Data. Using the Contiki operating system and the Zolertia motes, different configurations for the acquisition of signals have been tested, these analog signals measured directly from the human body require certain minimum bandwidth that must be met, on the other hand, the use of radio and core increases the use of the battery. An algorithm has been created for analyse the errors due to force the transmission to the maximum of the capacity, verifying the real limitations. Finally, a prototype of architecture is implemented and tested using artificially generated and real signals, these signals are ECG waveforms.
SubjectsInternet of things, Bioenginyeria, Internet de les coses, Bioengineering
DegreeMÀSTER UNIVERSITARI EN APLICACIONS I GESTIÓ DE L'ENGINYERIA DE TELECOMUNICACIÓ (MASTEAM) (Pla 2015)
URIhttp://hdl.handle.net/2117/119625
Collections
Share: