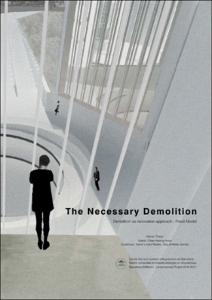 Document typeMaster thesis
Rights accessOpen Access
Abstract
The Presó Model de Barcelona is destinated to be closed in the year of 2017. However, except of being known as the oldest prison in Catalunya, the prison has also been a symbol of political repression of Catalan people. This master thesis consists of both theoretical and practical parts. The former researches the political repression cases, as well as meaning and intention of monument; while the latter one is an exercise on adapting the theory to transform the Presó Model de Barcelona. Through a series of demolitions and the concomitants, the previous symbol of repression will not only become a place of commemorate; moreover, a symbol of Catalan people's collective will, intection, and manifesto for their long awaited dawn- the independence.
Description
Màster universitari en Estudis Avançats en Arquitectura: Contemporary Project
SubjectsPrisons -- Spain -- Barcelona, Wrecking -- Spain -- Barcelona, Presons -- Edificis -- Catalunya -- Barcelona, Enderrocament -- Catalunya -- Barcelona
Location
1: La Nova Esquerra de l'Eixample, Barcelona, Espanya
URIhttp://hdl.handle.net/2117/119602
Collections
Share: