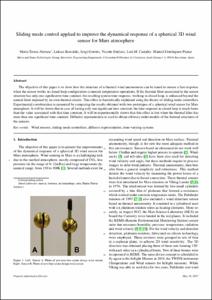 Document typeArticle
Rights accessOpen Access
Abstract
The objective of this paper is to show how the structure of a thermal wind anemometer can be tuned to ensure a fast response when the sensor works in closed loop configuration (constant temperature operation). If the thermal filter associated to the sensor structure has only one significative time constant, the resulting system time response, working in closed loop, is enhanced beyond the natural limit imposed by its own thermal circuit. This effect is theoretically explained using the theory of sliding mode controllers. Experimental corroboration is presented by comparing the results obtained with two prototypes of a spherical wind sensor for Mars atmosphere. It will be shown that in case of having only one significant time constant, the time response in closed loop is much faster than the value associated with that time constant. It will be experimentally shown that this effect is lost when the thermal filter has more than one significant time constant. Diffusive representation is used to obtain arbitrary-order models of the thermal structures of the sensors.
CitationAtienza, M.T., Kowalski, L., Gorreta, S., Jimenez, V., Castañer, L., Dominguez, M. Sliding mode analysis applied to improve the dynamical response of a spherical 3D wind sensor for Mars atmosphere. "Sensors and actuators A. Physical", 1 Novembre 2017, vol. 267, p. 342-350.
URIhttp://hdl.handle.net/2117/119586
DOI10.1016/j.sna.2017.09.044
ISSN0924-4247
Publisher versionhttps://www.sciencedirect.com/science/article/pii/S0924424717308828
Collections
Share: