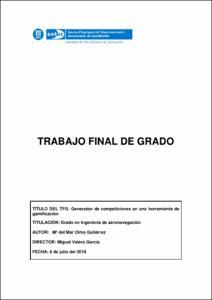 The project described in this work is a part of a collaborative project with the aim of implementing a web and mobile app, named Classpip, whose objective is to gamify teaching. This project is developed on a pre-existing open source software platform that sets the foundations and the technologies that will be used in this project, among which the HTML5 technology or the JavaScript language stand out. The whole process of development of the app has been performed with open source technologies. The aim of this project is the development of a tool dedicated to the creation of competitions between students and their posterior management by their teachers through a web admin portal. An additional tool that organizes students into teams is included, allowing to create team competitions. Lastly, this new competition section is also implemented in the mobile app, although only in query mode. To manage requests from both fronts (web and mobile), there is service-oriented architecture with the necessary logic to act as a lone back-end. It contains a MySQL database to store all of the received information and an API (Application Programming Interface) that is in charge of communication between the different components of the software. The admin panel is developed using Angular, and can be used from any operating system. The mobile app is created with Ionic, which is based on Angular, for the development of hybrid apps, which together with Apache Cordova allows the conversion of the native platform to Android and iOS using standard web technologies. To achieve collaborative development, all the components of the app are deposited in the GitHub platform repository, where the correct development of the code and its possible integration in the original source code are checked. Mainly, this document focuses on analyzing and describing in detail all the functionalities that have been included in the admin panel and in the mobile app. In addition, it explains the essentials to understand the implemented code, facilitating the job of future developers that continue working on this tool. It also includes an app validation that examines its functionalities through a videotutorial and carries out a user assessment that brings new ideas and improvements to continue growing.
SubjectsGamification, Games, Ludificació, Jocs
URIhttp://hdl.handle.net/2117/119560