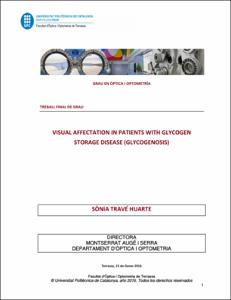 Document typeBachelor thesis
Rights accessOpen Access
Abstract
In this project we wanted to comprise the visual affectations of a rare/minority disease. Based on the little research there is in this field and the large effect that this may actually have in the visual sistem. We have to take into account that a disease like this one does not have the same level of research as AIDS or Malaria, due to its consideration around the world as a rare or mioritary disease, (low percentage of affected affected), therefore few grants are given for further exploration and research. By putting together the subject of “Geriatric and infantile optometry”, where we studied binocular dysfunctions and strabismus (either locomotor and accommodative), at the same time as the 5th International Congress of Glycogenosis, uniting forces, two students of the FOOT and a professor, Montserrat Augé i Serra, were at the Congress where we were lucky to be able to carry out a series of optometric examinations in patients affected with this disease thus having a large sample of patients with different subtypes of glycogen storage disease. During 5-6-7th June 2014, in Bellaterra, the 5th International Congress of Glycogenosis took place, where a part from nutritionists and physicians attending, there were doctors specialized in liver and muscles. They were giving to each attendee a guide of conferences and two books about the effects on glycogen storage disease in Spain and new palliative therapies or others, discovered thanks to scientific research, apart from certain products as food for testing into the diets of the patients with Glycogenosis.
SubjectsGlycogen storage disease, Eye -- Diseases, Ulls -- Malalties, Glicogenosi
URIhttp://hdl.handle.net/2117/119550
Collections
Share: