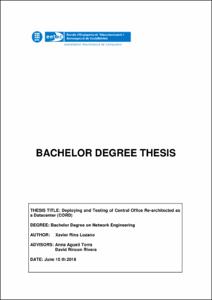 Document typeBachelor thesis
Rights accessOpen Access
Abstract
During the last years, data traffic on the Internet has increased dramatically (100% increases are reported in the last 8 years). Therefore, the architecture of access networks based on xDSL and fiber have been meeting the challenge of scaling up and adapting to the new needs of users. In addition, central offices do not follow a coherent or unified architecture, and are composed of of complex, expensive and typically proprietary devices. As a result, network operators are currently facing different problems, both economic and operational. A solution to these problems is CORD, an architecture currently in development and research that includes SDN, NFV and Cloud technologies, and aims to become the new central offices architecture. This project focuses on describing Residential CORD in detail, comparing it with a traditional architecture, installing its latest version and creating unique documentation for future applications or purposes. We also propose the application of an algorithm to improve the energy efficiency of Openstack (one of the key pieces of CORD). Regarding the results obtained, Cord in a Box has been successfully installed in a virtual machine provided by Cloudlab. It has also been installed on a physical server at Universitat Politècnica de Catalunya. From that installation, CORD and Cord in a Box have been described in depth, creating documentation and explanations not publicly until now. We have also installed Cord in a Box 5.0, adding a patch used to add extra servers to the system. From there, new documentation has been created, also non-existent until now. In addition, we have studied the possibily of modifying the Openstack resource allocation algorithm and we have initiated the implementation of the necessary changes in the system.
SubjectsCloud computing, Computer networks, Computació en núvol, Ordinadors, Xarxes d', Arquitectura d'ordinadors, Telecomunicació, Sistemes de
DegreeGRAU EN ENGINYERIA TELEMÀTICA (Pla 2009)
URIhttp://hdl.handle.net/2117/119461
Collections
Share: