Study of the impacts of the ionospheric scintillation on a multi-frequency, multi-constellation GBAS ground station 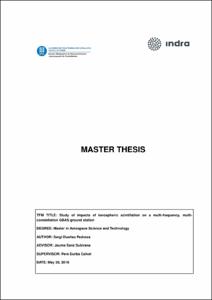 Ionospheric effects such as ionospheric storms, scintillation, or plasma bubbles are responsible of the performance degradation on Global Navigation Satellite Systems (GNSS). These threats are caused mainly by solar flares impacting the Earth, coronal mass ejections (CME), geomagnetic storms and lower atmospheric waves that propagate up to the ionosphere. This degradation on the GNSS signal is translated in loss of lock of the carrier phase (cycle-slips), changes in the velocity of the signal or changes in the phase of the signal. Obviously, all these variations degrade the navigation solution and the performance to compute corrections. On the other hand, in a Safety of Life (SoL) applications, such as the landing systems of an aircraft when landing on airports, the navigation solution has to be as reliable and accurate as possible. Indeed, the corrections computed by a ground based GNSS augmentation system (GBAS) ground station and sent to the airborne receiver have to accomplish rigorous conditions. The present project aims to study the effect of ionospheric scintillation in a newer prototype of GBAS ground station, based on multi-frequency and multi-constellation navigation satellite systems, such as GPS and Galileo. Through the analysis of the effects of scintillation on the current Matlab® prototype developed by INDRA SISTEMAS S.A., the consequences of ionospheric scintillation will be characterized in order to further improve the prototype and guarantee its continuity, availability and integrity.
SubjectsGlobal Positioning System, Ionosphere, Sistema de posicionament global, Ionosfera
URIhttp://hdl.handle.net/2117/119402