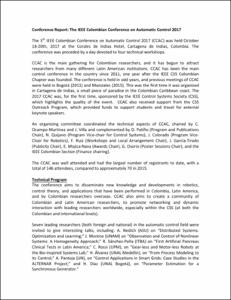 Patiño Guevara, Diego
Quijano Silva, Nicanor
Document typeArticle
Rights accessOpen Access
Abstract
The 3th IEEE Colombian Conference on Automatic Control 2017 (CCAC) was held October 18-20th, 2017 at the Corales de Indias Hotel, Cartagena de Indias, Colombia. The conference was preceded by a day devoted to four technical workshops. CCAC is the main gathering for Colombian researchers, and it has begun to attract researchers from many different Latin American institutions. CCAC has been the main control conference in the country since 2011, one year after the IEEE CSS Colombian Chapter was founded. The conference is held in odd years, and previous meetings of CCAC were held in Bogotá (2011) and Manizales (2015). This was the first time it was organized in Cartagena de Indias, a small piece of paradise in the Colombian Caribbean coast. The 2017 CCAC was, for the first time, sponsored by the IEEE Control Systems Society (CSS), which highlights the quality of the event. CCAC also received support from the CSS Outreach Program, which provided funds to support students and travel for external keynote speakers.
Description
© 20xx IEEE. Personal use of this material is permitted. Permission from IEEE must be obtained for all other uses, in any current or future media, including reprinting/republishing this material for advertising or promotional purposes, creating new collective works, for resale or redistribution to servers or lists, or reuse of any copyrighted component of this work in other works.
CitationOcampo-Martinez, C.A., Patiño, D., Quijano, N. Conference report: the IEEE Colombian conference on automatic control 2017. "IEEE control systems magazine", 2018, vol. 38, núm. 2, p. 106-109.
URIhttp://hdl.handle.net/2117/119378
DOI10.1109/MCS.2017.2786498
ISSN1066-033X
Publisher versionhttps://ieeexplore.ieee.org/document/8318597/
Collections
Share: