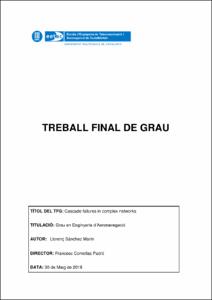 Document typeBachelor thesis
Rights accessOpen Access
Abstract
Globalization plays an important role in our society. There is a need to be connected and have the ability to reach any place in the world, for this purpose different networks or systems had been created such as Internet, transportation and communication systems, the power grid, social networks etc., which can be classified as complex networks and each of them is specialized in a need. These networks should have a high resilience against possible failures in any of its nodes. That can occur either randomly or because of planned attacks. Against this failures, the network should be able to redirect their flow through other nodes that are still operative. Recent studies have considered models for node cascade failures that lead to a network collapse as it has happened recently in real life networks like Twitter, Facebook, the global router network and the European electrical network. In this TFG we analyse the behaviour of different networks properties (random, small-world, scale-free, modular, geometrical, etc.) when they are confronted to node cascade failures. We study which network invariants and parameters affect the process. We have performed simulations and analysed the results by using the Python's package "NetworkX", which allows the creation, manipulation and analysis of complex networks. To perform the analysis we have compared the obtained behaviours according to the network structure and the nodes' functions. Afterwards, we have used the data from a real-life network like the USA air transport network and we have compared it with the behaviour of the generated networks. By this, the research shows us that what makes a network to collapse is mainly its structure instead of its centrality, and to reduce the network collapsing risk it is necessary that all nodes are well-connected among them at a local level.
SubjectsPython (Computer program language), Sistemes complexos, Python (Llenguatge de programació)
URIhttp://hdl.handle.net/2117/119352
Collections
Share: