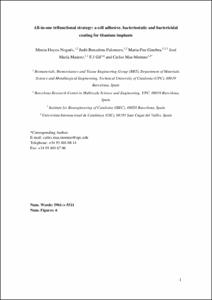 Document typeArticle
Rights accessOpen Access
All rights reserved. This work is protected by the corresponding intellectual and industrial property rights. Without prejudice to any existing legal exemptions, reproduction, distribution, public communication or transformation of this work are prohibited without permission of the copyright holder
Abstract
Strategies to inhibit initial bacterial adhesion are extremely important to prevent infection on biomaterial surfaces. However, the simultaneous attraction of desired eukaryotic cells remains a challenge for successful biomaterial-host tissue integration. Here we describe a method for the development of a trifunctional coating that repels contaminating bacteria, kills those that adhere, and promotes osteoblast adhesion. To this end, titanium surfaces were functionalized by electrodeposition of an antifouling polyethylene glycol (PEG) layer and subsequent binding of a peptidic platform with cell-adhesive and bactericidal properties. The physicochemical characterization of the samples via SEM, contact angle, FTIR and XPS analysis verified the successful binding of the PEG layer and the biomolecules, without altering the morphology and topography of the samples. PEG coatings inhibited protein adsorption and osteoblast-like (SaOS-2) attachment; however, the presence of cell adhesive domains rescued osteoblast adhesion, yielding higher values of cell attachment and spreading compared to controls (p < 0.05). Finally, the antibacterial potential of the coating was measured by live/dead assays and SEM using S. sanguinis as a model of early colonizer in oral biofilms. The presence of PEG layers significantly reduced bacterial attachment on the surfaces (p < 0.05). This antibacterial potential was further increased by the bactericidal peptide, yielding values of bacterial adhesion below 0.2% (p < 0.05). The balance between the risk of infection and the optimal osteointegration of a biomaterial is often described as “the race for the surface”, in which contaminating bacteria and host tissue cells compete to colonize the implant. In the present work, we have developed a multifunctional coating for a titanium surface that promotes the attachment and spreading of osteoblasts, while very efficiently inhibits bacterial colonization, thus holding promise for application in bone replacing applications.
CitationHoyos, M., Buxadera-Palomero, J., Ginebra, M.P., Manero, J., Gil, F., Mas-Moruno, C. All-in-one trifunctional strategy: A cell adhesive, bacteriostatic and bactericidal coating for titanium implants. "Colloids and Surfaces B: Biointerfaces", 1 Setembre 2018, vol. 169, p. 30-40.
URIhttp://hdl.handle.net/2117/119295
DOI10.1016/j.colsurfb.2018.04.050
ISSN1873-4367
Publisher versionhttps://www.sciencedirect.com/science/article/pii/S0927776518302613
Collections
Share: