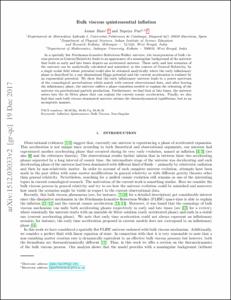 Pan, Supriya
Document typeArticle
Rights accessOpen Access
Abstract
In a spatially-flat Friedmann–Lemaître–Robertson–Walker universe, the incorporation of bulk viscous process in general relativity leads to an appearance of a nonsingular background of the universe that both at early and late times depicts an accelerated universe. These early and late scenarios of the universe can be analytically calculated and mimicked, in the context of general relativity, by a single scalar field whose potential could also be obtained analytically where the early inflationary phase is described by a one-dimensional Higgs potential and the current acceleration is realized by an exponential potential. We show that the early inflationary universe leads to a power spectrum of the cosmological perturbations which match with current observational data, and after leaving the inflationary phase, the universe suffers a phase transition needed to explain the reheating of the universe via gravitational particle production. Furthermore, we find that at late times, the universe enters into the de Sitter phase that can explain the current cosmic acceleration. Finally, we also find that such bulk viscous-dominated universe attains the thermodynamical equilibrium, but in an asymptotic manner
CitationHaro, J., Pan, S. Bulk viscous quintessential inflation. "International journal of modern physics D", 1 Abril 2018, vol. 27, núm. 5.
URIhttp://hdl.handle.net/2117/119222
DOI10.1142/S0218271818500529
ISSN0218-2718
Publisher versionhttps://www.worldscientific.com/doi/abs/10.1142/S0218271818500529
Collections
Share: