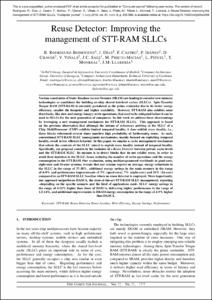 Document typeArticle
Rights accessOpen Access
European Commission's projectHiPEAC - High Performance and Embedded Architecture and Compilation (EC-H2020-687698)
Abstract
Various constraints of Static Random Access Memory (SRAM) are leading to consider new memory technologies as candidates for building on-chip shared last-level caches (SLLCs). Spin-Transfer Torque RAM (STT-RAM) is currently postulated as the prime contender due to its better energy efficiency, smaller die footprint and higher scalability. However, STT-RAM also exhibits some drawbacks, like slow and energy-hungry write operations that need to be mitigated before it can be used in SLLCs for the next generation of computers. In this work, we address these shortcomings by leveraging a new management mechanism for STT-RAM SLLCs. This approach is based on the previous observation that although the stream of references arriving at the SLLC of a Chip MultiProcessor (CMP) exhibits limited temporal locality, it does exhibit reuse locality, i.e. those blocks referenced several times manifest high probability of forthcoming reuse. As such, conventional STT-RAM SLLC management mechanisms, mainly focused on exploiting temporal locality, result in low efficient behavior. In this paper, we employ a cache management mechanism that selects the contents of the SLLC aimed to exploit reuse locality instead of temporal locality. Specifically, our proposal consists in the inclusion of a Reuse Detector (RD) between private cache levels and the STT-RAM SLLC. Its mission is to detect blocks that do not exhibit reuse, in order to avoid their insertion in the SLLC, hence reducing the number of write operations and the energy consumption in the STT-RAM. Our evaluation, using multiprogrammed workloads in quad-core, eight-core and 16-core systems, reveals that our scheme reports on average, energy reductions in the SLLC in the range of 37–30%, additional energy savings in the main memory in the range of 6–8% and performance improvements of 3% (quad-core), 7% (eight-core) and 14% (16-core) compared with an STT-RAM SLLC baseline where no RD is employed. More importantly, our approach outperforms DASCA, the state-of-the-art STT-RAM SLLC management, reporting—depending on the specific scenario and the kind of applications used—SLLC energy savings in the range of 4–11% higher than those of DASCA, delivering higher performance in the range of 1.5–14% and additional improvements in DRAM energy consumption in the range of 2–9% higher than DASCA.
CitationRodríguez, R., Díaz, J., Castro, F., Ibáñez , P., Chaver, D., Viñals, V., Sáez, J., Prieto, M., Piñuel, L., Monreal, T., Llaberia, J. Reuse Detector: improving the management of STT-RAM SLLCs. "Computer journal", 1 Juny 2018, vol. 61, núm. 6, p. 856-880.
URIhttp://hdl.handle.net/2117/119198
DOI10.1093/comjnl/bxx099
ISSN1460-2067
Publisher versionhttps://academic.oup.com/comjnl/advance-article-abstract/doi/10.1093/comjnl/bxx099/4568418
Collections
Share: