SOLAS Convention : Safety on Board 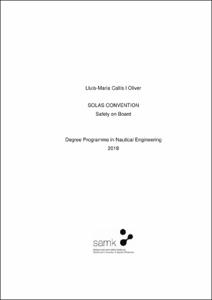 Show full item record
Callís Oliver, Lluís-Maria
CovenanteeSatakunnan ammattikorkeakoulu
Document typeBachelor thesis
Rights accessOpen Access
Description
This final project was dedicated to study some of the agreements that the In-ternational Maritime Organization approved over the past years. Concretely I decided to focus my efforts on the SOLAS conventions, all related with safety. I also tried to explain what the IMO was and how all its different organisms worked. It was essential and interesting to learn what an international organi-zation meant, and therefore; understand how all the laws that were approved had a direct effect on the entire world fleet. Since safety at sea is one of the most important issues related to the maritime sector, I thought that I needed to understand its evolution throughout the years. Because of different accidents that happened in the maritime world, a series of conventions were developed. After the sinking of the Titanic in 1912, a con-gress was organized in the United Kingdom to create the SOLAS. It covered and regulated the security on board of passenger ships and merchant marine. So, I asked myself, have all these measures worked? The work method used all along the thesis, was analysing directly from the original texts of the IMO. By reading and summarizing the four SOLAS con-vention, I wrote the most important ideas that I considered. I checked the most part of the job that IMO did related to safety over the past years, and the goals for the future. At the beginning, in 1914; the measures were really simple, and most of them were not even useful. Because of some historic facts like the sank of Titanic, the regulations became more strict and specific. Furthermore, technology and knowledge made a really high progress which allowed to make changes easily. The system established nowadays, is the result of these past years of work. However, our world is constantly evolving, and that is why organizations like IMO needs to be ready to face possible trouble
SubjectsMerchant marine -- Safety measures, Ships -- Safety regulations, Marina mercant -- Mesures de seguretat, Vaixells -- Reglaments de seguretat, Convenio Internacional para la Seguridad de la Vida Humana en el Mar
URIhttp://hdl.handle.net/2117/119127
Collections
Share: