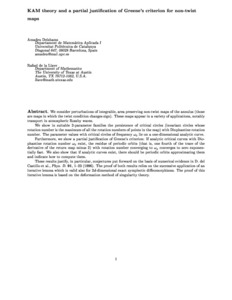 Llave Canosa, Rafael de la
Document typeArticle
Rights accessOpen Access
Abstract
We consider perturbations of integrable area preserving non twist maps of the annulus those are maps in which the twist condition changes sign These maps appear in a variety of applications notably transport in atmospheric Rossby waves We show in suitable parameter families the persistence of critical circles invariant circles whose rotation number is the maximum of all the rotation numbers of points in the map with Diophantine rotation number The parameter values with critical circles of frequency lie on a one dimensional analytic curve Furthermore we show a partial justication of Greenes criterion If analytic critical curves with Dio phantine rotation number exist the residue of periodic orbits that is one fourth of the trace of the derivative of the return map minus with rotation number converging to converges to zero exponen tially fast We also show that if analytic curves exist there should be periodic orbits approximating them and indicate how to compute them These results justify in particular conjectures put forward on the basis of numerical evidence in D del Castillo et al Phys D The proof of both results relies on the successive application of an iterative lemma which is valid also for d dimensional exact symplectic di eomorphisms The proof of this iterative lemma is based on the deformation method of singularity theory
URIhttp://hdl.handle.net/2117/1191
Collections
Share: