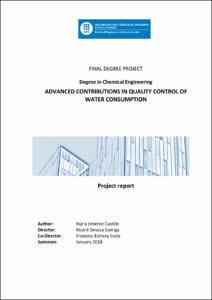 Except where otherwise noted, content on this work is licensed under a Creative Commons license : Attribution-NonCommercial-NoDerivs 3.0 Spain
Abstract
The present project is composed of two differentiated parts. In the first part, a study is carried out on the validation of the methylene blue method for the detection and quantification of chlorine dioxide present in water. Chlorine dioxide oxidizes leuco-blue methylene reagent, which is colorless, causing it to turn blue. This method is based on the spectrophotometric determination of the direct linear dependence between the absorbance and the chlorine dioxide concentration. When this method is used with real water a precipitate is formed due to the sulfates present in the water that makes impossible the reading in the spectrophotometer. For this reason, two methods are studied and validated to solve this problem: on the one hand, the precipitation of the sulfates is carried out by the addition of barium chloride and, subsequently, a filtration. The second method studied is based on extraction with the solvent 1,2-dichloroethane. In the second part, a sensory study about geosmin is carried through, where a linear relationship is found between the intensity of the odor as a function of the concentration of geosmin present in the water. This study is carried out by an expert group of panelists in water tasting.
SubjectsChlorine dioxide, Water, Water--Analysis, Aigua, Aigua -- Anàlisi, Clor
DegreeGRAU EN ENGINYERIA QUÍMICA (Pla 2009)
URIhttp://hdl.handle.net/2117/119038
Collections
Share: