The possibility of solar energy use on ro-pax ferries 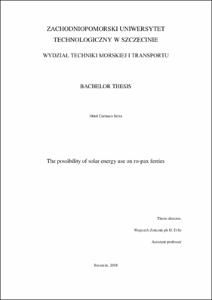 gmail.com
Tutor / director / evaluatorZeńczak, Wojciech
CovenanteeZachodniopomorski Uniwersytet Technologiczny w Szczecinie. Wydział Techniki Morskiej i Transportu
Document typeBachelor thesis
Rights accessOpen Access
Description
Nowadays, the society is starting to worry about global warming and its consequences. Maritime transport is one of the mean of transport most used in the world of today. As every way to transport people and goods around the world, ships are emitting pollutant gases to the atmosphere and contributing to the mentioned global warming. Fuel-oil is also the main part of the ship's operating cost. In this project there is proposed a solution in order to reduce the emissions of a ro-pax ferry by reducing its consumption of fuel-oil. The ship used is the ferry Côte d'Abâtre, that operates in the English channel, between Portsmouth and Le Havre. The solution used is the installation of solar panel in the upper deck of the ship. Using solar energy is possible to reduce the consumption of the fuel used in the generation of energy. The current development of solar technology is not enough to produce all the electrical energy that a large ship needs, but it is a solution that should be considered in order to reduce the consumption of fuel-oil and the emissions derived from its use.
SubjectsSolar energy, Vaixells -- Energia solar, Vaixells de càrrega rodada -- Energia solar
URIhttp://hdl.handle.net/2117/119009
Collections
Share: