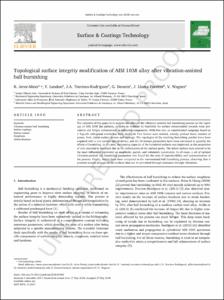 The objective of this paper is to analyze the effect of the vibration-assisted ball burnishing process on the topology of AISI 1038 flat surfaces, in order to evaluate its feasibility for surface enhancement towards wear prevention and fatigue enhancement in industrial components. With that aim, an experimental campaign based on a Taguchi orthogonal matrix has been deployed. Five factors were studied, namely: preload force, number of passes, feed, initial surface texture and strategy. The topologies of the resulting burnishing patches have been acquired with a non-contact optical device, and the 3D texture parameters have been calculated to quantify the effects of burnishing. In all cases, the bearing capacity of the burnished surfaces was improved, as the proportion of core material is increased due to the deformation of the surface peaks. The initial surface state proved to be the most influential parameter on amplitude, spatial, and volumetric parameters. In all cases, a set of optimal vibration-assisted ball burnishing parameters was found for the sake of reproducibility and systematization of the process. Finally, results have been compared to the conventional ball burnishing process, observing that it presents scratch damage on the surfaces that can be prevented through assistance through vibrations.
CitationJerez-Mesa, R., Landon, Y., Travieso-Rodríguez, J.A., Dessein, G., Lluma, J., Wagner, V. Topological surface integrity modification of AISI 1038 alloy after vibration-assisted ball burnishing. "Surface and coatings technology", 15 Setembre 2018, vol. 349, p. 364-377.
URIhttp://hdl.handle.net/2117/118910
DOI10.1016/j.surfcoat.2018.05.061
ISSN0257-8972