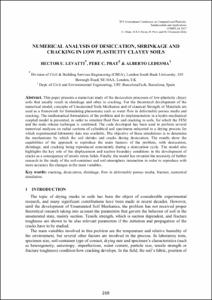 This paper presents a numerical study of the desiccation processes of low-plasticity clayey soils that usually result in shrinkage and often in cracking. For the theoretical development of the numerical model, concepts of Unsaturated Soils Mechanics and of classical Strength of Materials are used as a framework for formulating phenomena such as water flow in deformable porous media and cracking. The mathematical formulation of the problem and its implementation in a hydro-mechanical coupled model is presented, in order to simulate fluid flow and cracking in soils, for which the FEM and the node release technique is combined. The code developed has been used to perform several numerical analyses on radial sections of cylindrical soil specimens subjected to a drying process for which experimental laboratory data was available. The objective of these simulations is to determine the mechanisms by which the soil shrinks and cracks during desiccation. The results show the capabilities of the approach to reproduce the main features of the problem, with desiccation, shrinkage, and cracking being reproduced consistently during a desiccation cycle. The model also highlights the key role of the displacement and suction boundary conditions in the development of cracks as a consequence of tensile stress fields. Finally, the model has revealed the necessity of further research in the study of the soil-container and soil-atmosphere interaction in order to reproduce with more accuracy the changes in the main variables.
CitationLevatti, H., Prat, P., Ledesma, A. Numerical analysis of desiccation, shrinkage and cracking in low plasticity clayey soils. A: International Conference on Computational Plasticity. "Computational Plasticity XIV: Fundamentals and Applications: proceedings of the XIVInternational Conference on Computational Plasticity: Fundamentals and Applications, held in Barcelona, Spain 5-7September 2017". 2017, p. 268-275.
URIhttp://hdl.handle.net/2117/118860
ISBN978-84-946909-6-9
Publisher versionhttp://congress.cimne.com/complas2017/frontal/Doc/EbookCOMPLAS2017.pdf