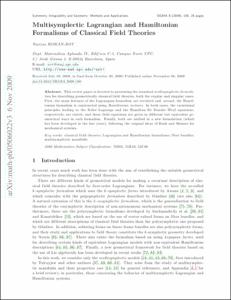 Document typeArticle
Rights accessOpen Access
Abstract
This review paper is devoted to presenting the standard multisymplectic formulation for describing geometrically classical field theories, both the regular and singular cases. First, the main features of the Lagrangian formalism are revisited and, second, the Hamiltonian formalism is constructed using Hamiltonian sections. In both cases, the variational principles leading to the Euler–Lagrange and the Hamilton–De Donder–Weyl equations, respectively, are stated, and these field equations are given in different but equivalent geometrical ways in each formalism. Finally, both are unified in a new formulation (which has been developed in the last years), following the original ideas of Rusk and Skinner for mechanical systems.
CitationRoman-Roy, N. Multisymplectic Lagrangian and Hamiltonian formalisms of classical field theories. "Symmetry, integrability and geometry: methods and applications", 2009, vol. 5, p. 100-125.
URIhttp://hdl.handle.net/2117/11879
ISSN1815-0659
Publisher versionhttp://www.emis.ams.org/journals/SIGMA/2009/100/sigma09-100.pdf
Collections
Share: