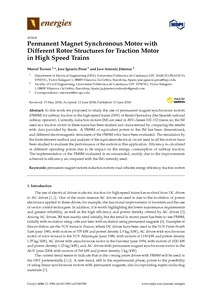 In this work we proposed to study the use of permanent magnet synchronous motors (PMSM) for railway traction in the high-speed trains (HST) of Renfe Operadora (the Spanish national railway operator). Currently, induction motors (IM) are used in AVE classes 102–112 trains, so, the IM used as a traction motor in these trains has been studied and characterized by comparing the results with data provided by Renfe. A PMSM of equivalent power to the IM has been dimensioned, and different electromagnetic structures of the PMSM rotor have been evaluated. The simulation by the finite element method and analysis of the equivalent electrical circuit used in all the motors have been studied to evaluate the performance of the motors in this application. Efficiency is calculated at different operating points due to its impact on the energy consumption of railway traction. The implementation of the PMSM evaluated is recommended, mainly due to the improvements achieved in efficiency as compared with the IM currently used.
CitationTorrent, M., Perat, J., Jiménez, J. Permanent magnet synchronous motor with different rotor structures for traction motor in high speed trains. "Energies", 13 Juny 2018, vol. 11, núm. 6, p. 1-17.
URIhttp://hdl.handle.net/2117/118694
DOI10.3390/en11061549
ISSN1996-1073
Publisher versionhttp://www.mdpi.com/1996-1073/11/6/1549