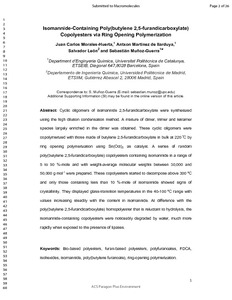 Except where otherwise noted, content on this work is licensed under a Creative Commons license : Attribution-NonCommercial-NoDerivs 3.0 Spain
Abstract
Cyclic oligomers of isomannide 2,5-furandicarboxylate were synthesized using the high dilution condensation method. A mixture of dimer, trimer, and tetramer species largely enriched in dimer was obtained. These cyclic oligomers were made to react with oligo(butylene 2,5-furandicarboxylate) in bulk at 220 °C by ring opening polymerization using Sn(Oct)2 as a catalyst. A series of random poly(butylene 2,5-furandicarboxylate) copolyesters containing isomannide in a range of 5–50 mol % and with weight-average molecular weights between 30,000 and 50,000 g·mol–1 were prepared. These copolyesters started to decompose above 300 °C, and only those containing less than 10 mol % of isomannide showed signs of crystallinity. They displayed glass-transition temperatures in the 40–100 °C range with values increasing steadily with the content in isomannide. At difference with poly(butylene 2,5-furandicarboxylate) homopolyester that is reluctant to undergo hydrolysis, the isomannide-containing copolyesters were noticeably degraded by water, much more rapidly when exposed to lipases.
CitationMorales, J., Martinez de Ilarduya, A., León, S., Muñoz, S. Isomannide-containing poly(butylene 2,5-furandicarboxylate) copolyesters via ring opening polymerization. "Macromolecules", 8 Maig 2018, vol. 51, núm. 9, p. 3340-3350.
URIhttp://hdl.handle.net/2117/118550
DOI10.1021/acs.macromol.8b00487
ISSN0024-9297
Publisher versionhttps://pubs.acs.org/doi/10.1021/acs.macromol.8b00487
Collections
Share: