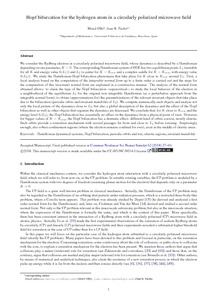 Document typeArticle
Rights accessOpen Access
Abstract
We consider the Rydberg electron in a circularly polarized microwave field, whose dynamics is described by a Hamiltonian depending on one parameter, K¿>¿0. The corresponding Hamiltonian system of ODE has two equilibrium points L1 (unstable for all K and energy value h(L1)) and L2 (a center for K¿<¿Kcrit and a complex saddle for K¿>¿Kcrit, with energy value h(L2)). We study the Hamiltonian-Hopf bifurcation phenomena that take place for K close to Kcrit around L2. First, a local analysis based on the computation of the integrable normal form up to a finite order is carried out and the steps for the computation of this (resonant) normal form are explained in a constructive manner. The analysis of the normal form obtained allows: to claim the type of the Hopf bifurcation –supercritical–; to study the local behavior of the electron in a neighborhood of the equilibrium L2 for the original non integrable Hamiltonian (as a perturbative approach from the integrable normal form); to obtain (approximations for) the parametrizations of the relevant invariant objects that take place due to the bifurcation (periodic orbits and invariant manifolds of L2). We compute numerically such objects and analyse not only the local picture of the dynamics close to L2, but also a global description of the dynamics and the effect of the Hopf bifurcation as well as other objects that organize the dynamics are discussed. We conclude that, for K close to Kcrit and the energy level h(L2), the Hopf bifurcation has essentially no effect on the dynamics from a physical point of view. However, for bigger values of K¿>¿Kcrit, the Hopf bifurcation has a dramatic effect: different kind of orbits coexist, mostly chaotic. Such orbits provide a ionization mechanism with several passages far from and close to L2 before ionizing. Surprisingly enough, also robust confinement regions (where the electron remains confined for ever), exist in the middle of chaotic areas
CitationOlle, M., Pacha, J. R. Hopf bifurcation for the hydrogen atom in a circularly polarized microwave field. "Communications in nonlinear science and numerical simulation", 1 Setembre 2018, vol. 62, p. 27-60.
URIhttp://hdl.handle.net/2117/118546
DOI10.1016/j.cnsns.2018.02.005
ISSN1007-5704
Publisher versionhttps://www.sciencedirect.com/science/article/pii/S1007570418300418
Collections
Share: