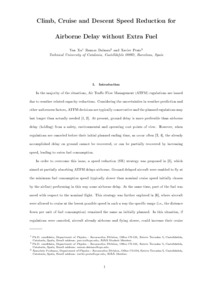 Except where otherwise noted, content on this work is licensed under a Creative Commons license : Attribution-NonCommercial-NoDerivs 3.0 Spain
Abstract
In the majority of situations, air traffic flow management (ATFM) regulations are issued due to weather-related capacity reductions. Considering the uncertainties in weather prediction and other unforeseen factors, ATFM decisions are typically conservative and the planned regulations may last longer than actually needed [1,2]. At present, ground delay is more preferable than airborne delay (holding) from safety, environmental, and operating cost points of view. However, when regulations are canceled before their initial planned ending time, as occur often [3,4], the already accomplished delay on ground cannot be recovered, or it can be partially recovered by increasing speed, leading to extra fuel consumption. To overcome this issue, a speed reduction (SR) strategy was proposed in [5], which aimed at partially absorbing ATFM delays airborne. Ground delayed aircraft were enabled to fly at the minimum fuel-consumption speed (typically slower than the nominal cruise speed initially chosen by the airline), performing in this way some airborne delay. At the same time, part of the fuel was saved with respect to the nominal flight. This strategy was further explored in [6], where aircraft were allowed to cruise at the lowest possible speed in such a way that the specific range (i.e., the distance flown per unit of fuel consumption) remained the same as initially planned. In this situation, if regulations were canceled, aircraft already airborne and flying slower could increase their cruise speed to the initially planned speed and recover part of the delay without extra fuel consumption [2,6–8]. In this paper, the SR strategy presented in [6] is extended in such a way that not only the cruise phase is used to perform linear holding but also the climb and descent phases are subject of optimization to maximize the total amount of airborne delay that can be achieved without incurring extra fuel costs. Three cases are studied: SR only in cruise; SR in the whole flight but keeping the nominal cruise altitude; and SR for the whole flight while also optimizing the cruise altitude to maximize delay.
CitationXu, Y., Dalmau, R., Prats, X. Climb, cruise, and descent speed reduction for airborne delay without extra fuel. "Journal of aircraft", 1 Maig 2018, vol. 55, núm. 3, p. 1299-1304.
URIhttp://hdl.handle.net/2117/118524
DOI10.2514/1.C034197
ISSN0021-8669
Publisher versionhttps://arc.aiaa.org/doi/10.2514/1.C034197
Collections
Share: