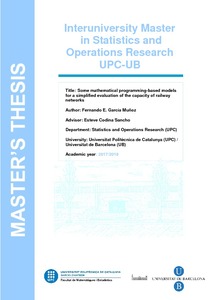 Document typeMaster thesis
Rights accessOpen Access
Abstract
In this master's thesis, two similar models that have recently appeared in the literature aimed at establishing sets of constraints that incorporate basic variables of flow or number of circulations on elements of a railway network are analyzed and extended to the case of networks with a general configuration. The potential of these models consists of their ability to give estimates of maximum flows in the network. Also, these proposed models provide capacity estimates following different methodologies that allow finding either a rank of the maximum capacity or a pointwise estimate value; a remarkable characteristic is that the congestion level that may be reached in the network is included as part of the modelling process. The approaches are tested in two networks of different size to study the influence of the operational conditions, dwell times, headway time and infrastructure over a railway system.
SubjectsProgramming (Mathematics), Programació (Matemàtica)
DegreeMÀSTER UNIVERSITARI EN ESTADÍSTICA I INVESTIGACIÓ OPERATIVA (Pla 2013)
URIhttp://hdl.handle.net/2117/118516
Collections
Share: