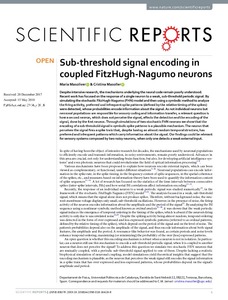 Document typeArticle
PublisherNature
Rights accessOpen Access
Abstract
Despite intensive research, the mechanisms underlying the neural code remain poorly understood. Recent work has focused on the response of a single neuron to a weak, sub-threshold periodic signal. By simulating the stochastic FitzHugh-Nagumo (FHN) model and then using a symbolic method to analyze the firing activity, preferred and infrequent spike patterns (defined by the relative timing of the spikes) were detected, whose probabilities encode information about the signal. As not individual neurons but neuronal populations are responsible for sensory coding and information transfer, a relevant question is how a second neuron, which does not perceive the signal, affects the detection and the encoding of the signal, done by the first neuron. Through simulations of two stochastic FHN neurons we show that the encoding of a sub-threshold signal in symbolic spike patterns is a plausible mechanism. The neuron that perceives the signal fires a spike train that, despite having an almost random temporal structure, has preferred and infrequent patterns which carry information about the signal. Our findings could be relevant for sensory systems composed by two noisy neurons, when only one detects a weak external input.
CitationMasoliver, M., Masoller, C. Sub-threshold signal encoding in coupled FitzHugh-Nagumo neurons. "Scientific reports", 29 Maig 2018, vol. 8, núm. 8276, p. 1-10.
URIhttp://hdl.handle.net/2117/118510
DOI10.1038/s41598-018-26618-8
ISSN2045-2322
Publisher versionhttps://www.nature.com/articles/s41598-018-26618-8
Collections
Share: