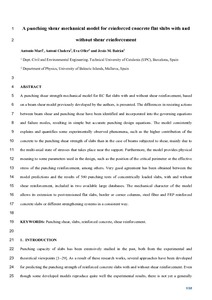 Except where otherwise noted, content on this work is licensed under a Creative Commons license : Attribution-NonCommercial-NoDerivs 3.0 Spain
ProjectEVALUACION DE LA CAPACIDAD RESISTENTE FRENTE A ESFUERZOS TANGENTES DE ESTRUCTURAS DE HORMIGON MEDIANTE MODELOS MECANICOS PARA LA EXTENSION DE SU VIDA UTIL (MINECO-BIA2015-64672-C4-1-R)
Abstract
A punching shear strength mechanical model for RC flat slabs with and without shear reinforcement, based on a beam shear model previously developed by the authors, is presented. The differences in resisting actions between beam shear and punching shear have been identified and incorporated into the governing equations and failure modes, resulting in simple but accurate punching design equations. The model consistently explains and quantifies some experimentally observed phenomena, such as the higher contribution of the concrete to the punching shear strength of slabs than in the case of beams subjected to shear, mainly due to the multi-axial state of stresses that takes place near the support. Furthermore, the model provides physical meaning to some parameters used in the design, such as the position of the critical perimeter or the effective stress of the punching reinforcement, among others. Very good agreement has been obtained between the model predictions and the results of 560 punching tests of concentrically loaded slabs, with and without shear reinforcement, included in two available large databases. The mechanical character of the model allows its extension to post-tensioned flat slabs, border or corner columns, steel fiber and FRP reinforced concrete slabs or different strengthening systems in a consistent way.
CitationMari, A., Cladera , A., Oller, E., Bairan, J.M. A punching shear mechanical model for reinforced concrete flat slabs with and without shear reinforcement. "Engineering structures", Juliol 2018, vol. 166, p. 413-426.
URIhttp://hdl.handle.net/2117/118484
DOI10.1016/j.engstruct.2018.03.079
ISSN0141-0296
Publisher versionhttps://www.sciencedirect.com/science/article/pii/S0141029617334508
Other identifiershttps://www.researchgate.net/publication/324216156_A_punching_shear_mechanical_model_for_reinforced_concrete_flat_slabs_with_and_without_shear_reinforcement
Collections
Share: