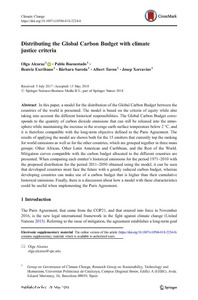 In this paper, a model for the distribution of the Global Carbon Budget between the countries of the world is presented. The model is based on the criteria of equity while also taking into account the different historical responsibilities. The Global Carbon Budget corresponds to the quantity of carbon dioxide emissions that can still be released into the atmosphere while maintaining the increase in the average earth surface temperature below 2 °C, and it is therefore compatible with the long-term objective defined in the Paris Agreement. The results of applying the model are shown both for the 15 emitters that currently top the ranking for world emissions as well as for the other countries, which are grouped together in three main groups: Other African, Other Latin American and Caribbean, and the Rest of the World. Mitigation curves compatible with the carbon budget allocated to the different countries are presented. When comparing each emitter’s historical emissions for the period 1971–2010 with the proposed distribution for the period 2011–2050 obtained using the model, it can be seen that developed countries must face the future with a greatly reduced carbon budget, whereas developing countries can make use of a carbon budget that is higher than their cumulative historical emissions. Finally, there is a discussion about how a model with these characteristics could be useful when implementing the Paris Agreement.
CitationAlcaraz, O., Buenestado, P., Escribano, B., Sureda, B., Turon, A., Xercavins, J. Distributing the global carbon budget with climate justice criteria. "Climatic change", 28 Maig 2018, p. 1-15.
URIhttp://hdl.handle.net/2117/118474
DOI10.1007/s10584-018-2224-0
ISSN0165-0009
Publisher versionhttps://link.springer.com/article/10.1007/s10584-018-2224-0