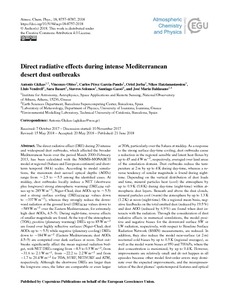 The direct radiative effect (DRE) during 20 intense and widespread dust outbreaks, which affected the broader Mediterranean basin over the period March 2000–February 2013, has been calculated with the NMMB-MONARCH model at regional (Sahara and European continent) and short-term temporal (84 h) scales. According to model simulations, the maximum dust aerosol optical depths (AODs) range from  ∼  2.5 to  ∼  5.5 among the identified cases. At midday, dust outbreaks locally induce a NET (shortwave plus longwave) strong atmospheric warming (DREATM values up to 285 W m−2; Niger–Chad; dust AODs up to  ∼  5.5) and a strong surface cooling (DRENETSURF values down to −337 W m−2), whereas they strongly reduce the downward radiation at the ground level (DRESURF values down to −589 W m−2 over the Eastern Mediterranean, for extremely high dust AODs, 4.5–5). During night-time, reverse effects of smaller magnitude are found. At the top of the atmosphere (TOA), positive (planetary warming) DREs up to 85 W m−2 are found over highly reflective surfaces (Niger–Chad; dust AODs up to  ∼  5.5) while negative (planetary cooling) DREs down to −184 W m−2 (Eastern Mediterranean; dust AODs 4.5–5) are computed over dark surfaces at noon. Dust outbreaks significantly affect the mean regional radiation budget, with NET DREs ranging from −8.5 to 0.5 W m−2, from −31.6 to 2.1 W m−2, from −22.2 to 2.2 W m−2 and from −1.7 to 20.4 W m−2 for TOA, SURF, NETSURF and ATM, respectively. Although the shortwave DREs are larger than the longwave ones, the latter are comparable or even larger at TOA, particularly over the Sahara at midday. As a response to the strong surface day-time cooling, dust outbreaks cause a reduction in the regional sensible and latent heat fluxes by up to 45 and 4 W m−2, respectively, averaged over land areas of the simulation domain. Dust outbreaks reduce the temperature at 2 m by up to 4 K during day-time, whereas a reverse tendency of similar magnitude is found during night-time. Depending on the vertical distribution of dust loads and time, mineral particles heat (cool) the atmosphere by up to 0.9 K (0.8 K) during day-time (night-time) within atmospheric dust layers. Beneath and above the dust clouds, mineral particles cool (warm) the atmosphere by up to 1.3 K (1.2 K) at noon (night-time). On a regional mean basis, negative feedbacks on the total emitted dust (reduced by 19.5 %) and dust AOD (reduced by 6.9 %) are found when dust interacts with the radiation. Through the consideration of dust radiative effects in numerical simulations, the model positive and negative biases for the downward surface SW or LW radiation, respectively, with respect to Baseline Surface Radiation Network (BSRN) measurements, are reduced. In addition, they also reduce the model near-surface (at 2 m) nocturnal cold biases by up to 0.5 K (regional averages), as well as the model warm biases at 950 and 700 hPa, where the dust concentration is maximized, by up to 0.4 K. However, improvements are relatively small and do not happen in all episodes because other model first-order errors may dominate over the expected improvements, and the misrepresentation of the dust plumes' spatiotemporal features and optical properties may even produce a double penalty effect. The enhancement of dust forecasts via data assimilation techniques may significantly improve the results.
CitationGkikas, A. [et al.]. Direct radiative effects during intense Mediterranean desert dust outbreaks. "Atmospheric Chemistry and Physics", 21 Juny 2018, vol. 2018, núm. 18, p. 8757-8787.
URIhttp://hdl.handle.net/2117/118438
DOI10.5194/acp-18-8757-2018
ISSN1680-7316
Publisher versionhttps://www.atmos-chem-phys.net/18/8757/2018/