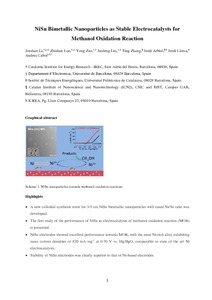 Cabot Codina, Andreu
Document typeArticle
Rights accessOpen Access
Abstract
Nickel is an excellent alternative catalyst to high cost Pt and Pt-group metals as anode material in direct methanol fuel cells. However, nickel presents a relatively low stability under operation conditions, even in alkaline media. In this work, a synthetic route to produce bimetallic NiSn nanoparticles (NPs) with tuned composition is presented. Through co-reduction of the two metals in the presence of appropriate surfactants, 3–5¿nm NiSn NPs with tuned Ni/Sn ratios were produced. Such NPs were subsequently supported on carbon black and tested for methanol electro-oxidation in alkaline media. Among the different stoichiometries tested, the most Ni-rich alloy exhibited the highest electrocatalytic activity, with mass current density of 820¿mA¿mg-1 at 0.70¿V (vs. Hg/HgO). While this activity was comparable to that of pure nickel NPs, NiSn alloys showed highly improved stabilities over periods of 10,000¿s at 0.70¿V. We hypothesize this experimental fact to be associated to the collaborative oxidation of the byproducts of methanol which poison the Ni surface or to the prevention of the tight adsorption of these species on the Ni surface by modifying its surface chemistry or electronic density of states.
CitationLi, J., Luo, Z., Zuo, Y., Liu, J., Zhang, T., Tang, P., Arbiol, J., Llorca, J., Cabot, A. NiSn bimetallic nanoparticles as stable electrocatalysts for methanol oxidation reaction. "Applied catalysis B. Environmental", 15 Octubre 2018, vol. 234, p. 10-18.
URIhttp://hdl.handle.net/2117/118349
DOI10.1016/j.apcatb.2018.04.017
ISSN0926-3373
Publisher versionhttps://www.sciencedirect.com/science/article/pii/S0926337318303436?via%3Dihub
Collections
Share: