The kitchen in urban dwellings in Barcelona, 1920–1950: out of step with modern architecture 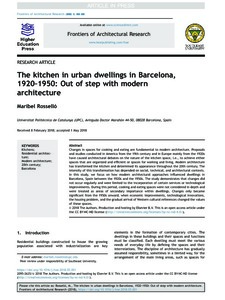 Document typeArticle
PublisherHigher Education Press
Rights accessOpen Access
Abstract
Changes in spaces for cooking and eating are fundamental to modern architecture. Proposals and studies conducted in America from the 19th century and in Europe mainly from the 1920s have caused architectural debates on the nature of the kitchen space, i.e., to achieve either spaces that are organized and efficient or spaces for working and living. Modern architecture has transformed the kitchen and determined its appearance throughout the 20th century. The intensity of this transformation has depended on social, technical, and architectural contexts. In this study, we focus on how modern architectural approaches influenced dwellings in Barcelona, Spain between the 1920s and the 1950s. The study demonstrates that changes did not occur regularly and were limited to the incorporation of certain services or technological improvements. During this period, cooking and eating spaces were not considered in depth and were treated as areas of secondary importance within dwellings. Changes only became significant from the 1950s onward, when economic improvements, technological innovations, the housing problem, and the gradual arrival of Western cultural references changed the values of these spaces.
CitationRossello, M. The kitchen in urban dwellings in Barcelona, 1920–1950: out of step with modern architecture. "Frontiers of architectural research", vol.7, no.3, 2018. p.347-366
URIhttp://hdl.handle.net/2117/118341
DOI10.1016/j.foar.2018.05.001
ISSN2095-2635
Publisher versionhttps://www.sciencedirect.com/science/article/pii/S2095263518300207
Collections
Share: