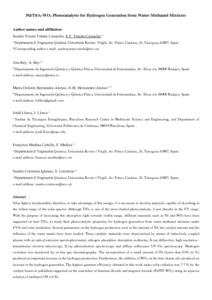 Medina Mena, Francisco
Contreras Iglesias, Sandra
Document typeArticle
Rights accessOpen Access
Abstract
Solar light is inexhaustible, and therefore to take advantage of this energy it is necessary to develop materials capable of absorbing energy in the widest range of the solar spectra. Although TiO2 is one of the most studied photocatalysts, it only absorbs in the UV range. With the aim of increasing this light absorption towards the visible range, in this study Pd and WO3 were supported on bare TiO2 to determine their photocatalytic properties for generating hydrogen from water-methanol mixtures under UVA and solar irradiation. Several parameters for the hydrogen production, such as the amount of Pd and the catalyst as well as the influence of the water matrix were studied. These catalytic materials were characterized by means of inductively coupled plasma with an optical emission spectrophotometer, nitrogen adsorption-desorption isotherms, X-ray diffraction, high resolution – transmission electron microscopy, X-ray photoelectron spectroscopy and diffuse reflectance UV–Vis spectroscopy. The hydrogen evolution was monitored by online gas chromatography. The incorporation of a small amount of Pd (lower than 0.01¿wt%) produced a large increase in the hydrogen production. Furthermore, adding WO3 on the bare titania also increased hydrogen generation. The highest quantum efficiency obtained in this work under solar radiation was 7.7% by the catalyst based on palladium supported on nanotubes of titanium dioxide and tungsten trioxide (Pd/NT-WO3) using an aqueous solution of methanol (50vol%).
CitationToledo, S. Y., Rey, A., Hernández, M. D., Llorca, J., Medina, F., Contreras, S. Pd/TiO2-WO3 photocatalysts for hydrogen generation from water-methanol mixtures. "Applied surface science", 15 Octubre 2018, vol. 455, p. 570-580.
URIhttp://hdl.handle.net/2117/118338
DOI10.1016/j.apsusc.2018.05.122
ISSN0169-4332
Publisher versionhttps://www.sciencedirect.com/science/article/pii/S0169433218314193?via%3Dihub
Collections
Share: