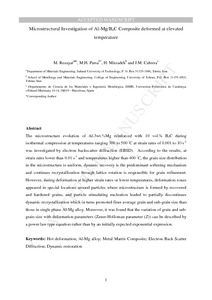 Document typeArticle
Rights accessOpen Access
Abstract
The microstructure evolution of Al-3wt.%Mg reinforced with 10¿vol% B4C during isothermal compression at temperatures ranging 300–500¿°C at strain rates of 0.001–10 s-1 was investigated by electron backscatter diffraction (EBSD). According to the results, at strain rates lower than 0.01 s-1 and temperatures higher than 400¿°C, the grain size distribution in the microstructure is uniform, dynamic recovery is the predominant softening mechanism and continues recrystallization through lattice rotation is responsible for grain refinement. However, during deformation at higher strain rates or lower temperatures, deformation zones appeared in special locations around particles where microstructure is formed by recovered and hardened grains, and particle stimulating nucleation leaded to partially discontinues dynamic recrystallization which in turns promoted finer average grain and sub-grain size than those in single phase Al-Mg alloy. Moreover, it was found that the variation of grain and sub-grain size with deformation parameters (Zener-Holloman parameter (Z)) can be described by a power law type equation rather than by an initially expected exponential expression.
CitationRezayat, M., Parsa, M., Mirzadeh, H., Cabrera, J. Microstructural investigation of Al-Mg/B4C composite deformed at elevated temperature. "Journal of alloys and compounds", 30 Setembre 2018, vol. 763, p. 643-651.
URIhttp://hdl.handle.net/2117/118335
DOI10.1016/j.jallcom.2018.05.324
ISSN0925-8388
Publisher versionhttps://www.sciencedirect.com/science/article/pii/S0925838818320619?via%3Dihub
Collections
Share: