In situ elucidation of the active state of Co-CeOx catalysts in the dry reforming of methane: the important role of the reducible oxide support and interactions with cobalt 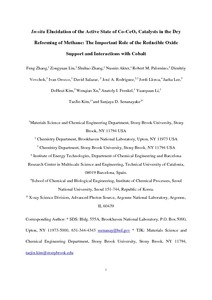 Lee, Jaeha
Kim, DoHeui
Xu, Wenqian
Frenkel, Anatoly I.
Li, Yuangyuang
Kim, Taejin
Senanayake, S. D.
Document typeArticle
Rights accessOpen Access
All rights reserved. This work is protected by the corresponding intellectual and industrial property rights. Without prejudice to any existing legal exemptions, reproduction, distribution, public communication or transformation of this work are prohibited without permission of the copyright holder
Abstract
The dry reforming of methane was systematically studied over a series (2-30 wt%) of Co (~5nm in size) loaded CeO2 catalysts, with an effort to elucidate the behavior of Co and ceria in the catalytic process using in-situ methods. For the systems under study, the reaction activity scaled with increasing Co loading, and a 10 wt% Co-CeO2 catalyst exhibiting the best catalytic activity and good stability at 500 °C with little evidence for carbon accumulation. The phase transitions and the nature of active components in the catalyst were investigated during pretreatment and under reaction conditions by ex-situ/in-situ techniques including X-ray diffraction (XRD) and ambient-pressure X-ray photoelectron spectroscopy (AP-XPS). These studies showed a dynamical evolution in the chemical composition of the catalysts under reaction conditions. A clear transition of Co3O4 → CoO → Co, and Ce4+ to Ce3+, was observed during the temperature programmed reduction under H2 and CH4. However, introduction of CO2, led to partial re-oxidation of all components at low temperatures, followed by reduction at high temperatures. Under optimum CO and H2 producing conditions both XRD and AP-XPS indicated that the active phase involved a majority of metallic Co with a small amount of CoO both supported on a partially reduced ceria (Ce3+/Ce4+). We identified the importance of dispersing Co, anchoring it onto ceria surface sites, and then utilizing the redox properties of ceria for activating and then oxidatively converting methane while inhibiting coke formation. Furthermore, a synergistic effect between cobalt and ceria and the interfacial site are essential to successfully close the catalytic cycle.
CitationZhang, F., Liu, Z., Zhang, S., Akter, N., Palomino, R., Vovchok, D., Orozco, I., Salazar, D., Rodriguez, J., Llorca, J., Lee, J., Kim, ., Xu, W., Frenkel, A., Li, Y., Kim , T., Senanayake, S. In situ elucidation of the active state of Co-CeOx catalysts in the dry reforming of methane: the important role of the reducible oxide support and interactions with cobalt. "ACS catalysis", 1 Abril 2018, vol. 8, núm. 4, p. 3550-3560.
URIhttp://hdl.handle.net/2117/118330
DOI10.1021/acscatal.7b03640
ISSN2155-5435
Collections
Share: