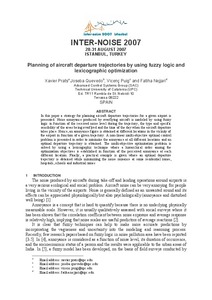 Document typeConference report
Rights accessOpen Access
Abstract
In this paper a strategy for planning aircraft departure trajectories for a given airport is presented. Noise annoyance produced by overflying aircraft is modelled by using fuzzy logic in function of the received noise level during the trajectory, the type and specific sensibility of the areas being overflyed and the time of the day when the aircraft departure takes place. Hence, an annoyance figure is obtained at different locations in the vicinity of the airport in function of a given trajectory. A non-linear multi-objective optimal control problem is presented in order to minimize the annoyance at all different locations and an optimal departure trajectory is obtained. The multi-objective optimization problem is solved by using a lexicographic technique where a hierarchical order among the optimization objectives is established in function of the perceived annoyance at each different location. Finally a practical example is given where an optimal departure trajectory is obtained while minimizing the noise nuisance at some residential zones, hospitals, schools and industrial zones.
CitationPrats Menéndez, X.;Quevedo, J.; Puig Cayuela, V.; Nejjari, F. Planning of aircraft departure trajectories by using fuzzy logic and lexocographic optimization. A: Inter-Noise 2007: The 36th International Congress and Exhibition on Noise Control Engineering. Estambul: Turkish Acoustical Society; IZOCAM, 2007.
URIhttp://hdl.handle.net/2117/1183
Collections
Share: