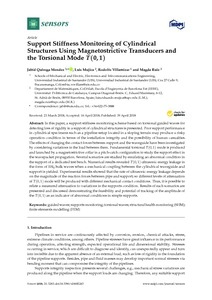 In this paper, a support stiffness monitoring scheme based on torsional guided waves for detecting loss of rigidity in a support of cylindrical structures is presented. Poor support performance in cylindrical specimens such as a pipeline setup located in a sloping terrain may produce a risky operation condition in terms of the installation integrity and the possibility of human casualties. The effects of changing the contact forces between support and the waveguide have been investigated by considering variations in the load between them. Fundamental torsional T(0,1) mode is produced and launched by a magnetostrictive collar in a pitch-catch configuration to study the support effect in the wavepacket propagation. Several scenarios are studied by emulating an abnormal condition in the support of a dedicated test bench. Numerical results revealed T(0,1) ultrasonic energy leakage in the form of SH0 bulk waves when a mechanical coupling between the cylindrical waveguide and support is yielded. Experimental results showed that the rate of ultrasonic energy leakage depends on the magnitude of the reaction forces between pipe and support; so different levels of attenuation of T(0,1) mode will be produced with different mechanical contact conditions. Thus, it is possible to relate a measured attenuation to variations in the supports condition. Results of each scenarios are presented and discussed demonstrating the feasibility and potential of tracking of the amplitude of the T(0,1) as an indicator of abnormal conditions in simple supports.
CitationQuiroga, J., Mujica, L.E., Villamizar, R., Ruiz, M. Support stiffness monitoring of cylindrical structures using magnetostrictive transducers and the torsional mode T(0,1). "Sensors", Abril 2018, vol. 18, núm. 4, p. 1-20.
URIhttp://hdl.handle.net/2117/118175
DOI10.3390/s18041263
ISSN1424-8220
Publisher versionhttp://www.mdpi.com/1424-8220/18/4/1263