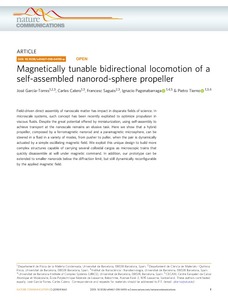 Field-driven direct assembly of nanoscale matter has impact in disparate fields of science. In microscale systems, such concept has been recently exploited to optimize propulsion in viscous fluids. Despite the great potential offered by miniaturization, using self-assembly to achieve transport at the nanoscale remains an elusive task. Here we show that a hybrid propeller, composed by a ferromagnetic nanorod and a paramagnetic microsphere, can be steered in a fluid in a variety of modes, from pusher to puller, when the pair is dynamically actuated by a simple oscillating magnetic field. We exploit this unique design to build more complex structures capable of carrying several colloidal cargos as microscopic trains that quickly disassemble at will under magnetic command. In addition, our prototype can be extended to smaller nanorods below the diffraction limit, but still dynamically reconfigurable by the applied magnetic field.
CitationGarcia, J., Calero, C., Sagués, F., Pagonabarraga, I., Tierno, P. Magnetically tunable bidirectional locomotion of a self-assembled nanorod-sphere propeller. "Nature communications", 25 Abril 2018, vol. 9, núm. 1663, p. 1-7.
URIhttp://hdl.handle.net/2117/118095
DOI10.1038/s41467-018-04115-w
ISSN2041-1723