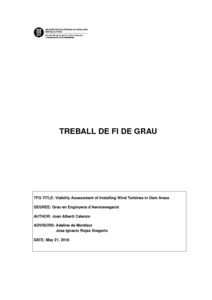 Except where otherwise noted, content on this work is licensed under a Creative Commons license : Attribution-NonCommercial-ShareAlike 3.0 Spain
Abstract
It is unassailable that Earth is undergoing some changes due to climate change, and fossil fuels are still the main power source all over the world. Rain regularity over the last years has become uncertain, what has significantly affected dams' water reservoirs. Hence their capacity for producing hydroelectric power has decreased and may continue to decrease. Indeed, this fact has forced governments to mainly use conventional power sources to supply energy. Consequently, electricity price has notoriously risen. In order to propose a solution to this issue, REDEEM Project (Recycling Dams for Eolic Energy Making), led by several professors and researchers of Universitat Politècnica de Catalunya (Barcelona, Spain), is studying the feasibility of installing small scale wind tur- bines in dam areas to reuse the existing infrastructure and take advantage of thermal winds. This Bachelor's Thesis has assessed the wind resource in several dam and valley areas located in Catalonia (Spain) by evaluating wind speed measurements taken in situ by weather stations belonging to MeteoCat (Catalan meteorology agency). Once the wind speed distribution at each location was known, it was possible to calculate the annual en- ergy output by a selected set of small scale wind turbines. Additionally, other interesting parameters have been calculated, such as the power coefficient (Cp), which determines how efficient the turbine is. All calculations are based on technical specifications provided by manufacturers. Moreover, the project has evaluated the possibility of employing floating structures and foundations, typically deployed in offshore environments. Eventually, an economic study has been carried out to determine the economic viability of the project at the best location. For this purpose, initial and variable costs, cost of energy, payback time and profit have been calculated for each turbine. This project has resulted in some of the studied locations being interesting candidates for wind energy generation, that is, being able to produce a very reasonable amount of energy per year. Besides, the economic evaluation has demonstrated that the installation is viable from a financial point of view as turbines have obtained rather low cost of energy values and relatively short payback times.
SubjectsAerodynamics, Wind power plants, Aerogeneradors -- Aerodinàmica, Energia eòlica, Parcs eòlics -- Disseny i construcció
DegreeGRAU EN ENGINYERIA D'AERONAVEGACIÓ (Pla 2010)
Location
1: Catalunya, 08002 Barcelona, Espanya
URIhttp://hdl.handle.net/2117/118069
Collections
Share: