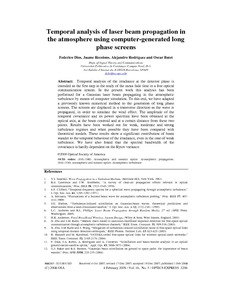 Batet Torrell, Óscar
Document typeArticle
Rights accessOpen Access
All rights reserved. This work is protected by the corresponding intellectual and industrial property rights. Without prejudice to any existing legal exemptions, reproduction, distribution, public communication or transformation of this work are prohibited without permission of the copyright holder
ProjectEVALUACION DE LAS PRESTACIONES DE LOS SISTEMAS DE COMUNICACIONES OPTICAS NO GUIADAS DE ALTA CAPACIDAD (MEC-TEC2006-12722)
Abstract
Temporal analysis of the irradiance at the detector plane is intended as the first step in the study of the mean fade time in a free optical communication system. In the present work this analysis has been performed for a Gaussian laser beam propagating in the atmospheric turbulence by means of computer simulation. To this end, we have adapted a previously known numerical method to the generation of long phase screens. The screens are displaced in a transverse direction as the wave is propagated, in order to simulate the wind effect. The amplitude of the temporal covariance and its power spectrum have been obtained at the optical axis, at the beam centroid and at a certain distance from these two points. Results have been worked out for weak, moderate and strong turbulence regimes and when possible they have been compared with theoretical models. These results show a significant contribution of beam wander to the temporal behaviour of the irradiance, even in the case of weak turbulence. We have also found that the spectral bandwidth of the covariance is hardly dependent on the Rytov variance.
CitationDios, V., Recolons, J., Rodriguez-Gomez, A., Batet, O. Temporal analysis of laser beam propagation in the atmosphere using computer-generated long phase screens. "Optics express", 4 Febrer 2008, vol. 16, núm. 3, p. 2206-2220.
URIhttp://hdl.handle.net/2117/118044
DOI10.1364/OE.16.002206
ISSN1094-4087
Publisher versionhttps://www.osapublishing.org/oe/abstract.cfm?uri=oe-16-3-2206
Collections
Share: