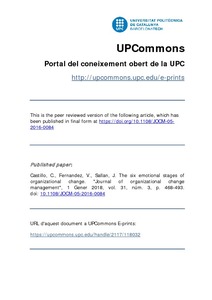 Document typeArticle
Rights accessOpen Access
Abstract
Purpose: The purpose of this paper is to define a model that both describes the evolution of the emotional stages of individuals during perceived negative organizational change and explains the evolution of their behavioral patterns and the effects on relationships with social environments (family, friends, co-workers, supervisor and organization). Design/methodology/approach: A qualitative methodological research design was adopted, using individual interviews as the primary method of qualitative data collection. In total, 15 people who experienced perceived negative organizational changes participated in this research. Findings: Through empirical qualitative research, an adapted Kübler (1969) model was used as a starting point. Co-occurrence analysis of the interviews led to the combination of the first two stages (denial and anger) of this model because they always appeared together. Two new stages (revising and deserting), based on the research of Schalk and Roe (2007), complete the model. Subsequently, the model comprised six emotional stages: denial and anger, bargaining, depression, revising, deserting and acceptance. The results show that individuals can move freely between the first four stages, but deserting and acceptance are always the final stages. Experiencing these emotional stages can influence the relationships between individuals and their social environments. During “denial and anger” and “bargaining,” the relationships with family, friends and co-workers improve; but during depression, the relationships with family and friends deteriorate, but because co-workers become much more important, those relationships improve. Relationships with supervisors deteriorate during denial and anger and depression but remain stable during bargaining. Research limitations/implications: Time’s passage became an inconvenience accounted for during data collection. Over time, separate events can be confused, and nuances that were once determinants can be eliminated. Longitudinal studies at various stages of the change process would complement these results. Practical implications: These results can guide managers in foreseeing and anticipating the actions that would reduce the emotional impact of organizational change and mitigate the impact of individuals’ negative emotions on the organization. Originality/value: This paper extends the existing theory about the strategies of coping and organizational changes.
CitationCastillo, C., Fernandez, V., Sallan, J. The six emotional stages of organizational change. "Journal of organizational change management", 1 Gener 2018, vol. 31, núm. 3, p. 468-493.
URIhttp://hdl.handle.net/2117/118032
DOI10.1108/JOCM-05-2016-0084
ISSN0953-4814
Publisher versionhttps://www.emeraldinsight.com/doi/abs/10.1108/JOCM-05-2016-0084
Collections
Share: