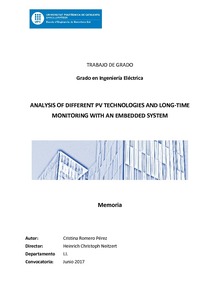 Show full item record
Romero Pérez, Cristina
Tutor / director / evaluatorNeitzert, Heinrich Christoph
Document typeBachelor thesis
Rights accessOpen Access
Abstract
The present thesis focuses on photovoltaic low-power generation and on the design, realization and test of an energetically autonomous measurement system. The conceptual phase aims to provide a better base for the study and comprehension of the structure and the electrical characteristics of two PV technologies currently in use: Amorphous Silicon and Polycrystalline Silicon based solar cells. In particular this thesis offers an analysis of questions related to the daily and seasonally related sun’s influence on the photovoltaic power-generation capacity of a small complete electrical energy harvesting system. In the experimental paragraph the monitoring and analysis of Amorphous Silicon and Polycrystalline Silicon solar cell arrays as well as the test of charge/discharge processes of different batteries and accumulators, which are based either on Ni-Cd, Alkaline or on Ni-MH technologies, used for storing the electrical energy that is generated by the investigated solar cell arrays, is presented. The final project also shows the results of the design and monitoring, of different electronic circuits energetically autonomous with the energy contribution of a PV powered rechargeable battery and an “embedded system”, using the ArduinoUNO platform. The experimental results lead to the conclusion that both solar cells are sufficient for the autonomous operation of the embedded measurement system during one morning, but, not powerful enough to allow the daily operation and recharge of the battery as the same time, because the consumption of the ArduinoUNO system is slightly too high, when combined with the mini-solar cell panels, used in the investigated system.
SubjectsPhotovoltaic power generation, Instal·lacions fotovoltaiques
URIhttp://hdl.handle.net/2117/117895
Collections
Share: