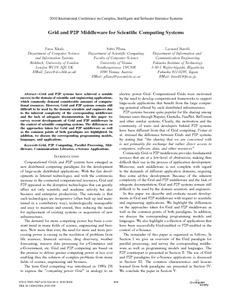 Pllana, Sabri
Barolli, Leonard
Document typeConference report
PublisherInstitute of Electrical and Electronics Engineers (IEEE)
Rights accessOpen Access
Abstract
Grid and P2P systems have achieved a notable success in the domain of scientific and engineering applications, which commonly demand considerable amounts of computational resources. However, Grid and P2P systems remain still difficult to be used by the domain scientists and engineers due to the inherent complexity of the corresponding middleware and the lack of adequate documentation. In this paper we survey recent developments of Grid and P2P middleware in the context of scientific computing systems. The differences on the approaches taken for Grid and P2P middleware as well as the common points of both paradigms are highlighted. In addition, we discuss the corresponding programming models, languages, and applications.
CitationXhafa, F., Pllana, S., Barolli, L. Grid and P2P middleware for scientific computing systems. A: International Conference on Complex, Intelligent, and Software Intensive Systems. "Proceedings of the International Conference on Complex, Intelligent and Software Intensive Systems, 15-18 February 2010, Krakow, Poland". Institute of Electrical and Electronics Engineers (IEEE), 2010, p. 409-414.
URIhttp://hdl.handle.net/2117/117884
DOI10.1109/CISIS.2010.109
ISBN978-1-4244-5917-9
Publisher versionhttps://ieeexplore.ieee.org/document/5447455/
Collections
Share: