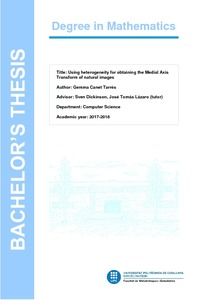 ; Dickinson, Sven
Document typeBachelor thesis
Rights accessOpen Access
Abstract
From Blum's Medial Axis Transform, that obtains the skeleton of binary images by joining the centers of all maximal inscribed disks in the shape, the AMAT was developed. The Appearance-MAT is a method that aims to compute the medial axes for natural images, as well as an appearance-based reconstruction. However, when considering the appearance, it deals only with color, and requires image smoothing to obtain a better result. As an approach to solving this problem, while abandoning the goal of reconstruction, we present and evaluate ten different methods for obtaining the medial axis transform, all based on the concept of heterogeneity. The idea behind this ensemble of methods is that in any natural image, any maximal inscribed disk should be homogeneous both in color and texture, while the disks that are not completely contained in an object should exhibit a much higher heterogeneity.
SubjectsArtificial intelligence, Intel·ligència artificial
URIhttp://hdl.handle.net/2117/117843
Collections
Share: