Development of the safety code AINA for the European DEMO designs 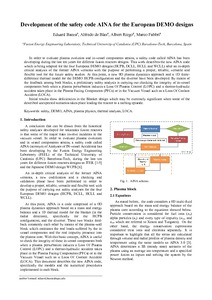 Except where otherwise noted, content on this work is licensed under a Creative Commons license : Attribution-NonCommercial-NoDerivs 3.0 Spain
ProjectEUROfusion - Implementation of activities described in the Roadmap to Fusion during Horizon 2020 through a Joint programme of the members of the EUROfusion consortium (EC-H2020-633053)
Abstract
In order to evaluate plasma evolution and in-vessel components strains, a safety code called AINA has been developing during the last ten years for different fusion reactors designs. This work describes the new AINA code which is being adapted for the four European DEMO designs (HCPB, DCLL, HCLL and WCLL) after an in-depth critical analysis of the former AINA versions with the purpose of performing a proper, reliable, versatile and flexible tool for the future safety studies. At this point, a new 0D plasma dynamics approach and a 1D finite-difference thermal model for the DEMO HCPB configuration and the divertor have been developed. By means of the feedback among both blocks, a preliminary safety analysis is carrying out checking the integrity of in-vessel components both when a plasma perturbation induces a Loss Of Plasma Control (LOPC) and a thermo-hydraulic accident takes place in the Plasma Facing Components (PFCs) or in the Vacuum Vessel such as a Loos Of Coolant Accident (LOCA). Initial results show deficiencies in the Blanket design which may be extremely significant when some of the described unexpected scenarios takes place leading the reactor to a melting episode.
CitationBaeza, E., de Blas, A., Riego, A., Fabbri, M. Development of the safety code AINA for the European DEMO designs. "Fusion engineering and design", 30 Abril 2018, vol. 136, Part B, p. 1084-1088.
URIhttp://hdl.handle.net/2117/117838
DOI10.1016/j.fusengdes.2018.04.074
ISSN0920-3796
Publisher versionhttps://www.sciencedirect.com/science/article/pii/S0920379618303624
Collections
Share: