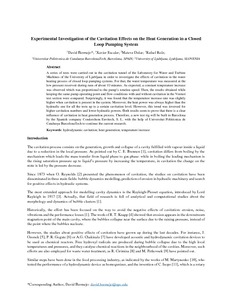 Except where otherwise noted, content on this work is licensed under a Creative Commons license : Attribution-NonCommercial-NoDerivs 3.0 Spain
Abstract
A series of tests were carried out in the cavitation tunnel of the Laboratory for Water and Turbine Machines of the University of Ljubljana in order to investigate the effects of cavitation in the water heating process of closed loop pumping systems. For that, the water temperature was measured at the low pressure reservoir during runs of about 10 minutes. As expected, a constant temperature increase was observed which was proportional to the pump’s rotation speed. Then, the results obtained while keeping the same pump operating point and flow conditions with and without cavitation in the Venturi test section were compared. Surprisingly, it was found that the temperature increase rate was slightly higher when cavitation is present in the system. Moreover, the heat power was always higher than the hydraulic one for all the tests up to a certain cavitation level. However, this trend was inversed for higher cavitation numbers and lower hydraulic powers. Both results seem to prove that there is a clear influence of cavitation in heat generation process. Therefore, a new test rig will be built in Barcelona by the Spanish company Condorchem Envitech, S. L. with the help of Universitat Politècnica de Catalunya BarcelonaTech to continue the current research
CitationBermejo, D., Escaler, X., Dular, M., Ruiz Mansilla, R. Experimental Investigation of the Cavitation Effects on the Heat Generation in a Closed Loop Pumping System. A: International Symposium on Cavitation. "CAV2018: Baltimore, USA: 14-16 May 2018: proceedings". 2018, p. 1-6.
URIhttp://hdl.handle.net/2117/117789
Collections
Share: