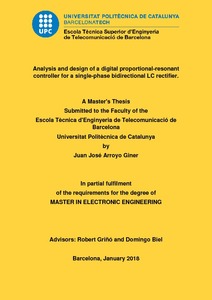 Document typeMaster thesis
Rights accessOpen Access
Abstract
A boost high-power-factor ac/dc converter is designed. The converter presents a bi-directional power flow capability. A bias capacitor connected in series with the ac source provides a dc voltage boost at the input. Accordingly, a voltage that is always positive is applied at the input of a conventional boost dc/dc converter. A bi-directional dc/dc boost converter is employed to couple the ac side with the dc output. The converter can be controlled with a sinusoidal average current at the ac side that is either in phase or 180o out of phase with the ac source. Therefore, this design can works with an unity power factor in rectification mode or inversion mode. The topology was employed for the design of an ac/dc battery charger with a unity power factor for rated power of 2 kVA. IGBT devices with anti-parallel diodes are used as switches. Replacing the diode bridge it can eliminates crossover distortions that are inevitable in a conventional Active Power Factor Correction (APFC) circuit with diode rectification bridge at its front end. Removing the diode bridge and usage of two bi-directional switches allows for bi-directional instantaneous power flow which makes possible operation in the inversion mode, in which power is transferred from the dc source to the ac source. At any instance of time only one semiconductor device conducts (as opposed to three or two in conventional rectifiers), which results in higher efficiency. The proper design of the control loops guaranties the output voltage regulation and operation with a unity power factor and low harmonic distortion despite to the load variations or the grid harmonic contents.
Description
Nowadays, bidirectional rectifiers with near unity power factor (PF) are used extensively. This work studies a quite singular topology: a dc-dc boost converter connected to the ac grid through a series capacitor. The capacitor function is biasing the ac network voltage to obtain a positive voltage for any time feeding the dc-dc boost converter. This approach can be used with any of the basic dc-dc topologies although, in this work, only the boost topology is considered. The converter dynamics is analyzed in open loop and a controller is proposed to obtain the desired value
SubjectsPower electronics, Analog-to-digital converters, Electrònica de potència, Convertidors analògic/digitals
URIhttp://hdl.handle.net/2117/117768
Collections
Share: