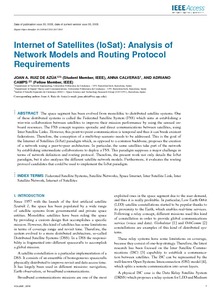 Document typeArticle
PublisherInstitute of Electrical and Electronics Engineers (IEEE)
Rights accessOpen Access
European Commission's projectONION - Operational Network of Individual Observation Nodes (EC-H2020-687490)
Abstract
The space segment has been evolved from monolithic to distributed satellite systems. One of these distributed systems is called the federated satellite system (FSS) which aims at establishing a win-win collaboration between satellites to improve their mission performance by using the unused on-board resources. The FSS concept requires sporadic and direct communications between satellites, using inter satellite links. However, this point-to-point communication is temporal and thus it can break existent federations. Therefore, the conception of a multi-hop scenario needs to be addressed. This is the goal of the Internet of satellites (IoSat) paradigm which, as opposed to a common backbone, proposes the creation of a network using a peer-to-peer architecture. In particular, the same satellites take part of the network by establishing intermediate collaborations to deploy a FSS. This paradigm supposes a major challenge in terms of network definition and routing protocol. Therefore, this paper not only details the IoSat paradigm, but it also analyses the different satellite network models. Furthermore, it evaluates the routing protocol candidates that could be used to implement the IoSat paradigm.
CitationRuiz de Azúa, J.A., Calveras, A., Camps, A. Internet of Satellites (IoSat): analysis of network models and routing protocol requirements. "IEEE access", 6 Abril 2018, vol. 6, p. 20390-20411.
URIhttp://hdl.handle.net/2117/117744
DOI10.1109/ACCESS.2018.2823983
ISSN2169-3536
Publisher versionhttps://ieeexplore.ieee.org/document/8332924/
Collections
Share: