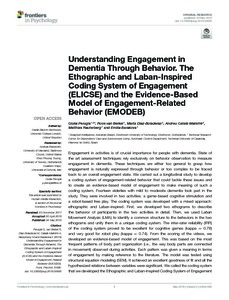 Rauterberg, Mattias
Barakova, Emilia
Document typeArticle
Rights accessOpen Access
Abstract
Engagement in activities is of crucial importance for people with dementia. State of the art assessment techniques rely exclusively on behavior observation to measure engagement in dementia. These techniques are either too general to grasp how engagement is naturally expressed through behavior or too complex to be traced back to an overall engagement state. We carried out a longitudinal study to develop a coding system of engagement-related behavior that could tackle these issues and to create an evidence-based model of engagement to make meaning of such a coding system. Fourteen elderlies with mild to moderate dementia took part in the study. They were involved in two activities: a game-based cognitive stimulation and a robot-based free play. The coding system was developed with a mixed approach: ethographic and Laban-inspired. First, we developed two ethograms to describe the behavior of participants in the two activities in detail. Then, we used Laban Movement Analysis (LMA) to identify a common structure to the behaviors in the two ethograms and unify them in a unique coding system. The inter-rater reliability (IRR) of the coding system proved to be excellent for cognitive games (kappa = 0.78) and very good for robot play (kappa = 0.74). From the scoring of the videos, we developed an evidence-based model of engagement. This was based on the most frequent patterns of body part organization (i.e., the way body parts are connected in movement) observed during activities. Each pattern was given a meaning in terms of engagement by making reference to the literature. The model was tested using structural equation modeling (SEM). It achieved an excellent goodness of fit and all the hypothesized relations between variables were significant. We called the coding system that we developed the Ethographic and Laban-Inspired Coding System of Engagement (ELICSE) and the model the Evidence-based Model of Engagement-related Behavior (EMODEB). To the best of our knowledge, the ELICSE and the EMODEB constitute the first formalization of engagement-related behavior for dementia that describes how behavior unfolds over time and what it means in terms of engagement.
CitationPerugia, G., van Berkel, R., Diaz, M., Catala, A., Rauterberg, M., Barakova, E. Understanding engagement in dementia through behavior. The ethographic and Laban-inspired coding system of engagement (ELICSE) and the evidence-based model of engagement-related behavior (EMODEB). "Frontiers in Psychology", 24 Maig 2018, p. 1-18.
URIhttp://hdl.handle.net/2117/117743
DOI10.3389/fpsyg.2018.00690
ISSN1664-1078
Publisher versionhttps://www.frontiersin.org/articles/10.3389/fpsyg.2018.00690/full
Other identifiershttps://www.ncbi.nlm.nih.gov/pmc/articles/PMC5976786/
Collections
Share: