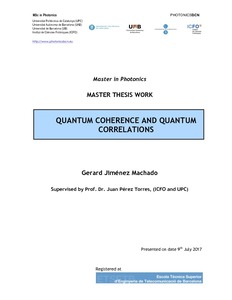 CovenanteeInstitut de Ciències Fotòniques (ICFO); Universitat de Barcelona; Universitat Autònoma de Barcelona
Document typeMaster thesis
Rights accessOpen Access
Abstract
We demonstrate a new type of optical coherence tomography (OCT) scheme based on ideas put forward by Mandel's group in 1991, curiously the same year than the first OCT scheme was demonstrated. It involves the measurement of the first-order correlation function (G(1)) between two beams that never interact with the sample under study. However, G(1) does depend on its reflectivity. This new scheme allows probing the sample of interest with one wavelength and measuring the coherence properties of light with another wavelength. As a result, we can gain penetration depth into the sample by using longer wavelengths, while still using the optimum wavelength for detection. We also show that G(1) and the degree of second-order correlation (G(2)), between the beams that interfere and a third witness beam, are intrinsically related, showing in this way the relevant and fascinating interplay between quantum coherence and quantum correlations.
SubjectsQuantum optics, Tomography, Òptica quàntica, Tomografia
URIhttp://hdl.handle.net/2117/117739
Collections
Share: