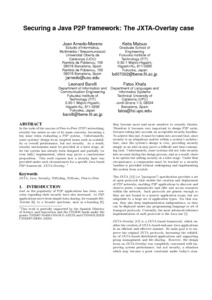 Document typeConference report
PublisherAssociation for Computing Machinery (ACM)
Rights accessOpen Access
Abstract
In the wake of the success of Peer-to-Peer (P2P) networking, security has arisen as one of its main concerns, becoming a key issue when evaluating a P2P system. Unfortunately, some systems' design focus targeted issues such as scalabil-ity or overall performance, but not security. As a result, security mechanisms must be provided at a later stage, after the system has already been designed and partially (or even fully) implemented, which may prove a cumbersome proposition. This work exposes how a security layer was provided under such circumstances for a specic Java based P2P framework: JXTA-Overlay
CitationArnedo, J., Matsuo, K., Barolli, L., Xhafa, F. Securing a Java P2P framework: The JXTA-Overlay case. A: International Conference on Information Integration and Web-based Applications & Services. "iiWAS 2009: the 11th International Conference on Information Integration and Web-based Applications & Services: Kuala Lumpur, Malasia: 14-16 December, 2009". New York: Association for Computing Machinery (ACM), 2009, p. 160-167.
URIhttp://hdl.handle.net/2117/117661
DOI10.1145/1806338.1806373
Publisher versionhttps://dl.acm.org/citation.cfm?id=1806373
Collections
Share: