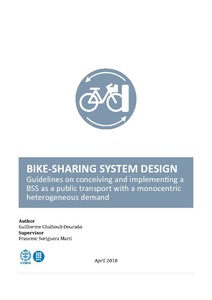 Document typeMaster thesis
Rights accessOpen Access
Abstract
Bike-Sharing Systems (BSS) are spreading over the world at a fast pace. Several reasons base the incentive from a government perspective, usually related to sustainability, healthy issues and general mobility. Although there was a great prioritization in the last years, literature on how to design and implement them are rather qualitative (e.g. guides and manuals) while technical research on the subject usually focus on extensive data inputs such as O/D matrixes and other methods that may not be robust nor extrapolated to other places. Also, lack of data in some regions make them of little use to be easily transferred. The thesis aims to work on an analytical continuum approach model to design a BSS, providing guidelines to a set of representative scenarios under the variation of the most important inputs. It is based on the optimization between Users and Agency, so there is a global outcome that minimizes total costs. In particular, it develops a monocentric approach to capture demand heterogeneity on cities center-peripheries. The model is calibrated on Barcelona's existing BSS and results are within an acceptable error range for an analytical modeling. By optimizing its design, it is possible to see a big gap compared to the actual one. It would require a substantial increase in infrastructure (twice stations and bicycles), but would allow a much better Level of Service. The scenarios results show the importance of demand density to the system. Low densities can rise sharply users’ costs. It becomes particularly critical on societies of a lesser economic power (with a low Value of Time - VoT), where the affordability by its citizens or government can even compromise the BSS feasibility. Regarding the central-peripheric relation, demand concentration within the central region benefits from Economies of Scale, although at a low level. Even so, infrastructure do not follow their relation in the same rate. The rise in concentration on the center does not imply in the same increase in infrastructure. The unbalance between zones rise the repositioning costs, but are considerably small compared to the system overall costs. The thesis presents these results as an initial guideline to be used as references along with the modeling that makes them possible. The center-periphery differentiation can be seen both, as a reflect from the different characteristics from a region and also be used as steps to implementation of a BSS in phases, as it usually occurs
SubjectsBicycle commuting, Desplaçaments en bicicleta
DegreeMÀSTER UNIVERSITARI EN CADENA DE SUBMINISTRAMENT, TRANSPORT I MOBILITAT (Pla 2014)
URIhttp://hdl.handle.net/2117/117643
Collections
Share: